Posted on July 1, 2015 by Stephanie Margolin 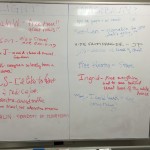 Icebreaker: Would you rather be able to fly, or be invisible?

At Hunter College Libraries, we often complain that there is rarely time available for us (those who teach) to talk about our teaching and share ideas, both best practices and biggest challenges. This spring, Sarah Ward and I began considering a time and space for such a conversation. In an attempt to be as inclusive and democratic as possible, we (the organizers) invited interested library faculty and staff to complete a Doodle poll to choose the best date and then, following an “unconference” model, to nominate topics via a Padlet “wall.” Expenses for the event were minimal: adjunct coverage at the reference desks.  We invited folks to bring brown bag lunches, and we organizers contributed some cookies.

Library Instruction Day became a reality on Tuesday, June 23 from 10-1, with approximately 14 of us attending, representing all four of Hunter’s libraries; members of the technical services team, as well as reference and instruction. We began the day with an icebreaker: Which super-power would you rather have, flight or invisibility, and why? Participants, fairly evenly divided, shared their answers on a white board. 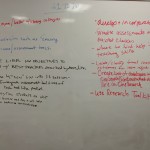 We then spent about an hour gaining context in an interactive workshop lead by Meredith Reitman, Hunter’s Director of Assessment, titled “What are your students really learning?” The remaining two hours were spent in informal discussion of ideas from the participant-generated list (seeded with a few additional items by the organizers).  Attempting to practice what we preach, we closed by asking each participant to generate a three-item “to do” list, based on ideas generated by the event. Each person then shared his/her top item on the white board.

Our discussion was great and the feedback was generally positive, with interest in making the event annual. What do you do in your library to meet this need?

This entry was posted in Events, Learning Outcomes. Bookmark the permalink.
Need help with the Commons? Visit our
help page Send us a message

Built with WordPress | Protected by Akismet | Powered by CUNY