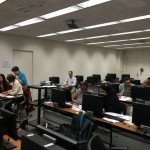 First, participants had an introductory discussion about criteria to evaluate educational games used in an Information Literacy class and suggested rubric. They then played several games:

At the end of the workshop participants worded criteria for the Evaluation Rubric, recreated here.

One Response to Educational Games: Developing a Rubric for Evaluating IL Games